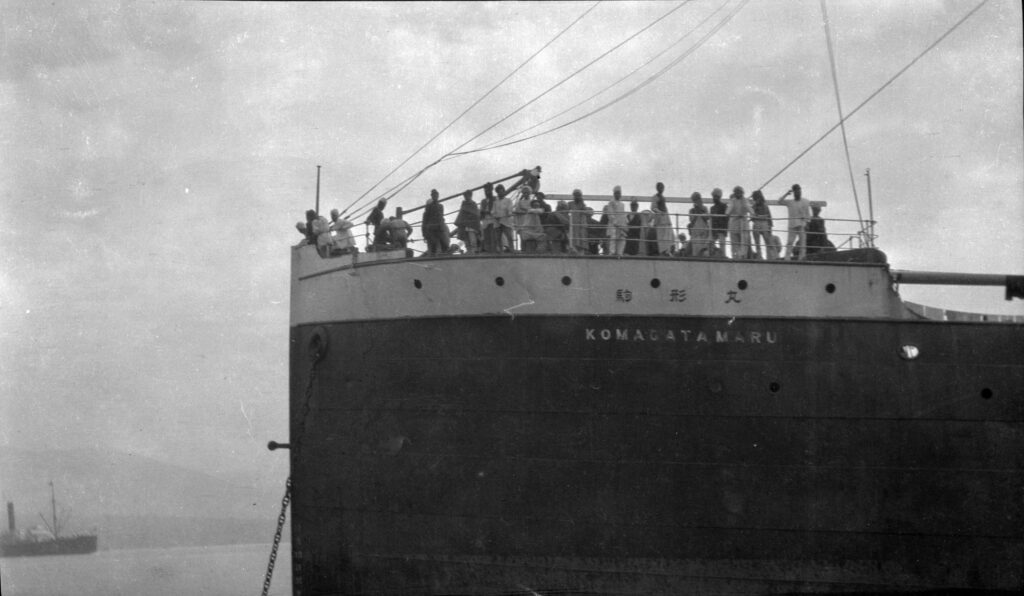 In the year 1900 the census reported that there where 2050 people from India on the North American continent. The majority of these people were Punjabis who had settled in Canada who had come with the hope of finding work so that they could improve their economic situation from what it had been in Punjab. Canadians wanted the “brown invasion” to stop. They felt that the growing number of Indians would take over their jobs in factories, mills and lumber yards. It was these insecurities which led British Columbia to pass stringent laws discouraging the immigration of Indians to Canada. Indians had to have at least $200 on their person to enter British Columbia and had to have come via direct passage from India. These were very unreasonable laws as the average Indian only earned about ten cents a day. The Canadian government was also pressuring steamship companies to stop selling tickets to Indians. In 1907 a bill was passed denying all Indians the right to vote. They were prohibited to run for public office, serve on juries, and were not permitted to become accountants, lawyers or pharmacists. All this was done to stop the “brown Invasion.” On the other hand Japanese and Chinese were immigrating in unlimited numbers.

In 1914 the Komagata Maru was an outright challenge to these exclusionist laws. The Komagata Maru was a Japanese trampsteamer, renamed Guru Nanak Jahaz, launched from Hong Kong by Baba Gurdit Singh (1860-1954), an adventurous Sikh businessman, to take a batch of Indian emigrants to Canada. The ship’s route departed from Hong Kong, stopped in Japan and then headed to Canada. Its passengers included 376 Indians, all Punjabis, among whom 340 were Sikhs, 12 Hindus, and 24 Muslims. The ship was eventually turned back at Vancouver where landing was refused, and terminated eventually at Calcutta.

Bhai Gurdit Singh, Bhai Daljit Singh and his friend Bhai Vir Singh from Ferozepur were staying in a Gurdwara in Hong Kong in 1914. The story of Chief Justice Hunter’s judgment in Victoria, B.C., about the release of 39 Asian Indians was on everybody’s lips. The emigrants were overjoyed. Bhai Daljit Singh began selling tickets for departures to Canada. However, the British Government of Hong Kong was watching the activities of Bhai Gurdit Singh because the charter of Komagata Maru was in his name. Two days before the ship was due to sail, Bhai Gurdit Singh was arrested by Hong Kong police on the charge of illegally selling tickets for an illegal voyage and the ship placed under police guard. The Sikh Police of Hong Kong were often used to terrorize prospective emigrants.

According to all accounts, when it was announced that the ship was going to Canada, its full 500 accommodations were booked, but when Gurdit Singh was arrested by Hong Kong authorities, almost two-thirds of the prospective passengers decided to cancel out.

Gurdit Singh was released after having been held for three days and the ship sailed from Hong Kong on 4 April 1914, making intermediate stops to pick up more passengers at Shanghai, Moji and Yokohoma. When the Komagata Maru arrived at Vancouver on 23 May 1914, there were 376 Indians aboard the vessel, of whom all but 30 were Sikhs.

The progress of the Komagata Maru was reported in British Columbian papers as a “mounting Oriental invasion.” When the ship arrived in Canadian waters, it was cordoned off and only 22 men who could prove their Canadian domicile were allowed to land. Pressure was brought to bear upon Gurdit Singh to pay the charter dues immediately or suffer the ship to be impounded. Gurdit Singh’s protests that he could only pay the money after he had fulfilled his contract with the passengers by getting them into Canada and had sold the cargo which he had on board were ignored.

Sikhs in Canada raised $22,000 to pay for the charter. They appealed to the Canadian people and government for justice, sent telegrams to the King, the Duke of Connaught, the Viceroy, and Indian leaders in India and England. There were public meetings in several towns of the Punjab to express sympathy with the passengers of the Komagata Maru. The Shore Committee of Vancouver Sikhs ultimately took the case of the Komagata Maru to court. A full bench of the Supreme Court decided that the new orders-in-council barred judicial tribunals from interfering with the decisions of the Immigration department. At the end of the two months only 24 passengers were given permission to legally stay in Canada. On July 23, 1914 the Komagata Maru was forced to leave Victoria harbor and return to Hong Kong.

As The Komagata Maru approached Calcutta on September 26, 1914, a European gunboat signaled the ship to stop. The ship was put under guard and the passengers were held as prisoners. The Komagata Maru was taken to a place called Budge Budge, about seventeen miles away from its original destination of Calcutta. These new developments took the passengers of the ship by surprise. After two months of litigation in Canada they were not interested in any new developments of this kind. Baba Gurdit Singh inquired upon as to the change of their course, an official informed him that the passengers were being sent to Punjab via a special train. Many of the passengers did not want to go to Punjab. They had business to attend to in Calcutta, some wished to look for work there, and most importantly, the passengers wanted to place the Sri Guru Granth Sahib, which they had taken with them on their journey, in a Calcutta Gurdwara.

The British officials did not care what the passengers wanted. They were going to be put on a train to Punjab and that would be the end of it. But the passengers were adamant on going to Calcutta. They were the rightful owners of the ship and the British officials had no reason to keep them on the ship or send them to Punjab. They felt that some action had to be taken, so they decided to march to Calcutta.

Their main purpose on reaching Calcutta was to hand over the Sri Guru Granth Sahib and to see the governor. The journey was long and after numerous threats by the police, they were left with no choice but to head back to Budge Budge. At Budge Budge, they were ordered to board the ship once again. The passengers, led by Baba Gurdit Singh, refused. A policeman attacked Baba Gurdit Singh with his baton but was stopped by a fellow passenger. It was at this point that firing started. Baba Gurdit Singh was carried to safety. But not all passengers were to be so fortunate. Twenty-nine fell victim to the bullets of British officials and 20 died. Here was another senseless massacre of innocent Indians at the hands of the British. The was the tragic end of the passengers of the Komagata Maru.

The heroic deeds of the Komagata Maru men and their trials aroused the admiration and sympathy of the entire nation.