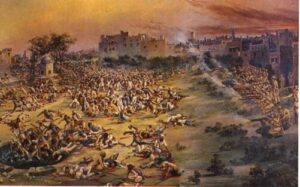 On 9 April, the governor of the Punjab, Sir Michael Francis O’Dwyer (1864-1940), suddenly decided to deport from Amritsar Dr Satyapal and Dr Saif ud-Din Kitchlew, two very popular leaders in the region. This led to a general strike in Amritsar. Groups of citizens soon merged together into a crowd of about 50,000 marching on to protest to the deputy commissioner against the deportation of the two leaders. The crowd, however, was stopped and fired upon near the railway foot-bridge.

There was an uneasy calm in the city on 11 April. In the evening that day, Brigadier-General Reginald Edward Harry Dyer (b. 1864, ironically at Murree in the Punjab), commander 45th Infantry Brigade at Jalandhar, arrived in Amritsar. He immediately established file facto army rule, though the official proclamation to this effect was not made until 15 April. The troops at his disposal included 475 British and 710 Indian soldiers. On 12 April he issued an order prohibiting all meetings and gatherings.

On 13 April which marked the Baisakhi festival, a large number of people,mostly Sikhs, had poured into the city from the surrounding villages. Local leaders called upon the people to assemble for a meeting in the Jallianvala Bagh at 4.30 in the evening. Brigadier-General Dyer set out for the venue of the meeting at 4.30 with 50 riflemen and two armoured cars with machine guns mounted on them. Meanwhile, the meeting had gone on peacefully, and two resolutions, one calling for the repeal of the Rowlatt Act (2 bills passed by a Sedition Committee, popularly known as Rowlatt Committee on the legislation necessary to deal with criminal conspiracies connected with the revolutionary movement in India.) and the other condemning the firing on 10 April, had been passed. A third resolution protesting against the general repressive policy of the government was being proposed when Dyer arrived at about 5.15 p.m. He deployed his riflemen on an elevation near the entrance and without warning or ordering the crowd to disperse, opened fire. The firing continued for about 20 minutes whereafter Dyer and his men marched back the way they had come. 1650 rounds of .303-inch ammunition had been fired. Dyer’s own estimate of the killed based on his rough calculations of one dead per six bullets fired was between 200 and 300. The official figures were 379 killed and 1200 wounded.

According to Pandit Madan Mohan Malaviya, who personally collected information with a view to raising the issue in the Central Legislative Council, over 1,000 were killed. The total crowd was estimated at between 15,000 and 20,000, Sikhs comprising a large proportion of them.

The protest that broke out in the country is exemplified by the renunciation by Rabindranath Tagore of the British Knighthood. Mass riots erupted in the Punjab and the government had to place five of the districts under martial law. Eventually an enquiry committee was set up. The Disorder Inquiry Committee known as Hunter Committee after its chairman, Lord Hunter, held Brigadier-General R.E.H. Dyer guilty of a mistaken notion of duty, and he was relieved of his command and prematurely retired from the army. The Indian National Congress held its annual session in December 1919 at Amritsar and called upon the British Government to “take early steps to establish a fully responsible government in India in accordance with the principle of self determination.”

The Sikhs formed the All India Sikh League as a representative body of the Panth for political action. The League held its first session in December 1919 at Amritsar simultaneously with the Congress annual convention. The honouring of Brigadier-General Dyer by the priests of Sri Darbar Sahib, Amritsar, led to the intensification of the demand for reforming management of Sikh shrines already being voiced by societies such as the Khalsa Diwan Majha and Central Majha Khalsa Diwan. This resulted in the launching of what came to be known as the Gurdwara Reform movement, 1920-25. Some Sikh servicemen, resenting the policy of non-violence adopted by the leaders of the Akali movement, resigned from the army and constituted thc nucleus of an anti-British terrorist group known as Babbar Akalis.