Since the birth of the Khalsa in the Land of Five Rivers, countless sons and daughters of Punjab have given their lives to protect their freedom, their people and their natural resources. Just like the looting foreign invaders have taken different forms in the army of Ahmad Shah Abdali, the British colonialists, and today’s foreign and Indian capitalists, Punjab’s organized resistance has manifested itself from time to time in the Babbar Akalis, the Gadhr Party and the Kharkoo Jathebandis of the Sikh Liberation Movement. 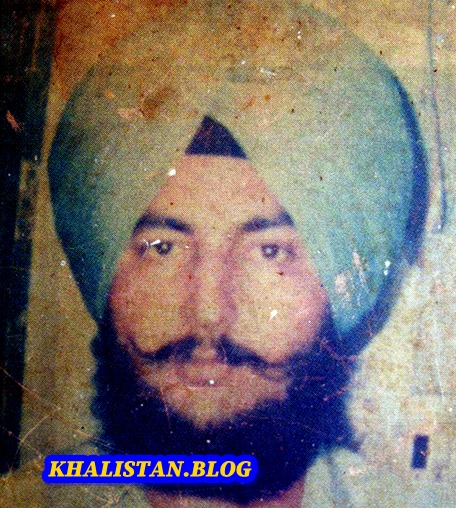 Shaheed Bhai Balwinder Singh Jattana Babbar was one of the Sikh Liberation Movement’s heroes, who struggled endlessly to end the looting and subjugation of Punjab. Bhai Sahib was a dedicated and determined Naujavaan – steadfast on his principles – who made the ultimate sacrifice for the liberation of the Sikh Kaum. At the young age of 25, Bhai Balwinder Singh left the peace of his own home and his education to to fight for an independent Sikh homeland. Bhai Sahib entered the battlefield fearlessly and quickly rose to prominence in the Malwa region of Punjab. Recognizing his leadership qualities and his Gursikhi Jeevan, Bhai Balwinder Singh was soon established as Babbar Khalsa’s Malwa Area Commander.

Bhai Balwinder Singh and his companions, such as, Jathedar Bhagat Singh Bhagta (Ropar), Bhai Harmeet Singh Bhaowal and Bhai Charanjeet Singh ‘Channa’ were responsible for many courageous actions in their area and struck fear in the hearts of the police. One such action took place on July 23, 1990 in Chandigarh’s Sector 26 at the SYL Canal’s head office.

Since the British colonizers made their exit from the Indian subcontinent and transferred power to India’s Brahmin, “free” Hindu India has oppressed, looted and exploited the people of Punjab unceasingly. One such scheme to cripple the Sikh’s of Punjab economically and ecologically, was to divert and steal Punjab’s river water. With this end in mind, the Satluj-Yamuna-Link canal was proposed in 1982 to carry Punjab’s river water to neighboring Haryana and despite the democratic protest of Punjab’s people, construction of the project began over the next few years. Remembering the words of Guru Gobind Singh Jee that, “when all peaceful means fail, it is righteous to raise the sword,” Bhai Balwinder Singh Jatana, Bhai Jagtar Singh Panjola, Bhai Balbir Singh Fauji and Bhai Harmeet Singh Bhaowal decided to stop the looting of Punjab’s resources “by any means necessary.”

On the morning of the 23rd, all four of the Guru’s Singhs approached the head office on scooters while the chief engineers of the SYL project held a meeting on the second floor of the building. The jatha of Babbar’s entered the office casually and made their way to the meeting place with silenced pistols. Like lightning, they struck – eliminating M.S. Sikri and Avtar Aulakh, the engineers who were collaborating with the Brahmin Sarkar to loot Punjab’s resources and livelihood. Just as casually as they had entered, the Singhs walked out of the office and left on the same scooters they had come on. The government was shaken by the audacity of the action and immediately halted the SYL project. 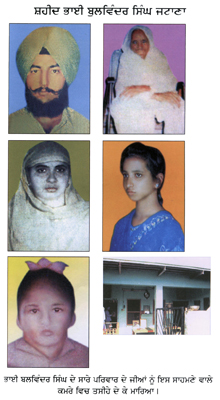 On August 29th of the following summer, Jujharoo Singhs attacked SSP Sumedh Saini, killing his driver and bodyguard. Saini survived the attack with few injuries and his suspicion immediately fell on Bhai Balwinder Singh. In an act of revenge, Saini sent his group of police cat Nangs, led by Ajit Poohla, to Bhai Balwinder Singh’s village home in Jatana. Upon arriving they found Bhai Sahib’s 80 year old grandmother, 40 year old aunt, 13 year old cousin and his 5 year old nephew suffering from polio. Nang Poohla and his cronies, proceeded to murder all four family members and burnt their bodies along with the home. Illustrating his unshakable dedication to the liberation struggle, when Bhai Sahib learned of the attack, he remained calm and said, “Their plan is to divert us from the path of freedom. They kill our families and expect us to kill innocent people (Hindus) in return. Sikhs do not kill anyone out of anger. We will be harming the movement by resorting to the police’s tactics.”

It was a few days later, on September 4, 1991, that an informer alerted the police of Bhai Sahib’s whereabouts – hoping to collect the Rs. 16 lakh reward on his head. It was the afternoon of the fourth when Bhai Balwinder Singh and Bhai Charanjeet Singh ‘Channa’ were driving towards Sadhugarh village when they saw a police checkpoint. They abruptly turned their jeep around and ran into nearby fields for an encounter with the police. Both Singh’s had very little ammunition and were soon martyred by the police.

It’s this blood that has watered the fertile Land of Five Rivers that invigorates us to continue our struggle and never give up in the face of the oppressor. As Punjab’s waters are continuously looted, our land and resources stolen and our people butchered mercilessly, we must look to our history for guidance and inspiration to continue our fight for Azadi. Khalistan is our manzil and no matter how hard the Brahmin sarkar tries to break us or the cowards try to sway us… Jang jari rahegi…

“Our struggle will continue as long as a handful of men, be they foreign or native, or both in collaboration with each other, continue to exploit the labour and resources of our people. Nothing shall deter us from this path.”
–Kartar Singh Sarabha